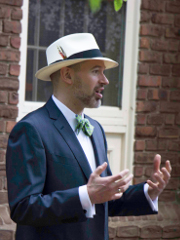 Professor Benjamin Justice, Chair, Department of Educational Theory, Policy, and Administration, studies the history of education in the United States. His research focuses on the ways in which states educate citizens through institutions (such as schools, prisons, and the military), interactions (such as police encounters), and laws. In addition to numerous articles and book chapters, he is the author or editor of three books, including the The Founding Fathers, Education, and “the Great Contest,” which won the Critics Choice Book Award of the American Educational Studies Association, The War that Wasn’t: Religious Conflict and Compromise in the Common Schools of New York State, which was named Book of the Year by the New York State Archives, and Have a Little Faith: Religion, Democracy, and the American Public School. Dr. Justice is a former high school Social Studies teacher, is a graduate of Yale College (BA) and Stanford University (MA, PhD).

E  This email address is being protected from spambots. You need JavaScript enabled to view it.
W http://gse.rutgers.edu/benjamin_justice